The Five Dysfunctions of a Team

Bottom Line: Lessons to be learned, but reality is much more complex.

Teams are complex because they are made up of individuals who each bring their own backgrounds, perspectives, expertise, and motivations to work. Harnessing the potential of a given group takes a strong collaborative leader who utilizes a clear framework for how to develop effective teams that communicate, buy into decisions, hold one another accountable in a safe and supportive manner, and have shared outcomes. To bring some clarity to these difficult and sometimes emotionally taxing leadership actions, the book “The Five Dysfunctions of a Team: A Leadership Fable” by Patrick Lencioni was chosen for analysis in order to determine what it provides in terms of how to think though team-based challenges and solutions.

The bulk of the book is made up of a fable in which a CEO is hired to take over for a company that is two years old but already showing signs of regression. When the company started, Decision Tech had been seen as rising star with venture capital streaming in, a seemingly perfect business plan, and a set of experienced and highly regarded executives. They had a head start on the competition and a better product, but now the company was missing deadlines, employee turn-over was rising, and morale was slipping.

The first move by the board to mitigate the issues was to unanimously ask the current CEO and co-founder, Jeff, to step down. He did so voluntarily, not wanting to miss out on the financial windfall should the company go public. The 150 employees were shocked by his removal but weren’t surprised since they had seen the troubling direction of the company.

Kathryn was announced as the new CEO but her background did not seem like a fit. She lacked high-tech experience, had spent 15 years in manufacturing before retiring at 54, making her older than most CEO’s in Silicon Valley, and had held mainly operational roles. The Board Chairman was the primary force behind her hiring because he knew her on a personal level as well as having had followed her professional career. Though the board felt like they were in a desperate situation, there was shared trepidation about her hiring.

With this less than auspicious welcome, Kathryn began her tenure by keeping Jeff in his role and spending the first two weeks by observing him, the executive team, staff members, and as many meetings as she could. In those first two weeks, her only action item was to announce a series of two-day retreat workshops for the executive team in Napa Valley. She believed that the dysfunctional state of the executive team was the pivotal challenge facing the company and she was willing to stake her reputation on this. Though Kathryn sensed the issues she would face, she believed in herself, her skillset, and in her plan of action.

The executive team was made up of Jeff, the former CEO and current head of business development who also sat on the board, Mikey, head of marketing, Martin, chief technologist, JR, head of sales, Carlos, head of customer support, Jan, chief financial officer, and Nick, chief operating officer. Each member had a history of past successes as well as their strengths and challenges that become more apparent as the story develops. The Staff, as employees referred to them, was not seen as a team and Kathryn was serious about changing that.

The first challenge for Kathryn hit when Martin informed the executives by email that JR and he were meeting with a company who was considering a purchase. Kathryn met with Martin and deftly let him know that working as a team was her first priority and that she would be seeing him at the retreat. Kathryn stood firm in this decision to postpone the sales meeting in favor of the retreat even after pushback from Jeff and a call from the Chairman asking her to change her mind.

The bulk of the book takes place during the three retreats in which Kathryn walks her team through the model of team dysfunctions using various exercises, probing questions, and moving to real-world analysis. The model Kathryn proposes has five dysfunctions that build upon one another, with the base of team dysfunction being an absence of trust. This dysfunction is prevalent when team members do not feel safe to be vulnerable or have courage to take risks. A fear of conflict is the next challenge and is observable when people either do not share their opinions or are unable to argue about content without it feeling personal. Above fear of conflict is lack of commitment which leads teams to avoid buying into a shared decision. Avoidance of accountability is after commitment because to take ownership of any shared goals requires 100% commitment. Last is an inattention to results that drives individuals to put their personal goals before the team and focus on their own progress rather than shared measurable results. A pictorial model summary is provided in Appendix 1.

The subsequent chapters detail the events of the retreat, with one chapter in the middle taking place back at the office. The content is carried mainly through dialogue via Kathryn’s perspective. The author includes many moments of hierarchical tension between the executives and Kathryn as well as discord among the executives themselves. They worked through some of habits the team had adopted, the details of how each person saw his or her role within the organization and team, and ways to move forward more effectively. Within these chapters, JR quits to take on a previous role because he doesn’t agree with Decision Tech’s direction or the use of time during the retreats. Mikey is also fired by Kathryn due to Mikey’s lack of growth of team supportive behaviors as well as her overall affect.

The fable ends with two chapters, one three months and the other one year after Kathryn’s start, that take place back at the office that mainly serve to update the reader on the team and company’s progress. In the three-month update chapter, a new person is introduced as the head of sales and is indoctrinated into the team model by all of the members of the executive team. It is clear to him, in a positive way, that the team functioned like no other team he had ever been on before. By the end, the company had made significant progress in working as a team and meeting their shared goal of signing 18 new clients.

Overall, “The Five Dysfunctions of a Team” provides an easy to read and interesting introduction to how to build and lead an effective team. The characters serve as proxies for many of the personalities that anyone may encounter within a group of people, such as those who are over-achievers, introverts/extroverts, and even malcontents. Being a book heavy on dialogue, their interactions, though somewhat contrived, show their perceptions about each other as well as themselves and showcase their growth throughout the process.

Since so few details are shared about the actual business, the material presented is broad but also generalizable. While there might be certain differences in the environments in which team might need to function, such as in a crisis, across multiple locations, in the public sector, or with unions, there are certain interpersonal and organizational dynamics that are universal. In fact, the model allows for adaptability due to its simplicity and focus on people interactions versus any specific business context.

Seeing as the process Lencioni illustrates takes months to begin to gain traction and ends with a one-year update, the author makes it clear that there is no magic bullet for teamwork. It takes time and a commitment to consistency within the model for everyone’s behavior and choices to begin to take shape. There was no single action or one-and-done seminar that changed the team’s, and therefore the company’s, direction. Time is a precious commodity, and though there are many instances when tremendous pressure is placed upon boards and leaders to deliver quick results, the book makes the case that the leader’s work with the model must be given time to develop.

Lencioni also offers the reader useful material to understand the model more deeply. There is a 15-question team assessment, with questions pertaining to each of the five dysfunctions, for a leader to use to analyze their team’s dynamics. The author then breaks each of the dysfunctions down, beginning with a description of what each encompasses and their effects within a team. There are then suggestions for how to overcome that dysfunction with examples of how teams look and act when in the dysfunction and when excelling beyond the challenge. Each dysfunction section also includes a page or so for “The Role of the Leader” which provides some key challenges the leader may face, some observations to be cognizant of, and suggestions for implementation.

Though “The Five Dysfunctions of a Team” is an acclaimed best-seller, it is missing some major components that might better help a leader as well as any teammate. Notably missing is that motivation, as whole, is not addressed. The premise in the book seems to be that good leadership and a strong usage of the model would provide teams with productivity and efficacy. This team-level view of motivation is based upon healthy conflict, shared accountability, and a shared focus on results. Ultimately, the motivation is intrinsic as there is no mention of external motivators, such as bonuses, or even details on how to build more intrinsic motivation, such as forms of positive feedback.

Since teams are made up of individuals, Lencioni seems to gloss over the needs of the individual. The characters lack the depth to encompass some of the drives, challenges, and goals a real individual may have and the book doesn’t address how to meet people where they are while still maintaining an overall balance on the team. Even among a group of executives there would be relative stars, core performers, and even laggards (Steenburgh & Ahearne, 2012). With such a high-level view of people, the book makes team development a bit more simplistic and sterile than anyone might encounter in their job.

With a fable as the book’s primary vehicle for content presentation it also lacks empirical evidence to support the model’s effectiveness or the efficacy of certain leadership actions. These missing pieces make the model seem too reliant upon a highly skilled leader rather than presenting a robust framework a leader could implement with some level of fidelity. Not only do Kathryn’s actions and words seem a bit too perfect at each point, she basically serves as boss and professor. She is the only holder of knowledge about the model and upcoming steps. This makes the model nearly impossible for someone, especially a new or developing leader, to utilize from the book without further research.

The fable, and book overall, also seem to oversimplify the complex situations real company-based teams face. For instance, being a CEO, Kathryn is afforded more latitude than most leaders would be allowed, such as letting go of a high-level executive or deeming her eight direct reports as too many and being able to reduce the number through a reorganization of the company. There also lacked any discussion of how the team model and leadership attributes were being transposed by the executives themselves within their respective teams.

In the end, “The Five Dysfunctions of a Team” by Patrick Lencioni is an easy to approach and meaningful introduction to teams and leadership. It provides just enough for the reader to understand that there are reasons behind ineffective teams and that there is a way to move forward. Even with some significant missing pieces that could provide readers with important support, understanding, and guidance, Lencioni’s book opens a gateway to further research by leaders and those who wish to become better teammates.

McMahon, T. (2018). The five dysfunctions of a team. Retrieved from: http://www.aleanjourney.com/2018/01/the-five-dysfunctions-of-team.html 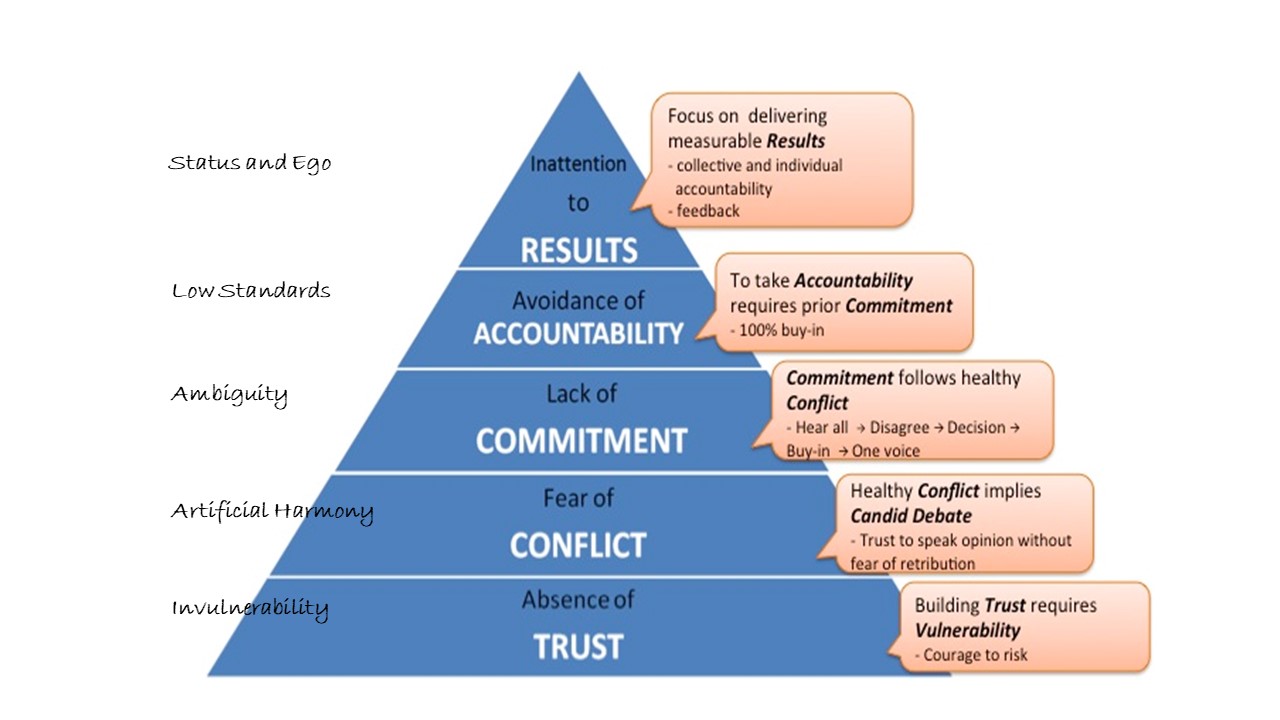